It was Halloween night. Ba suggested watching a horror movie. And... Hmmm... What happened next? Look at the pictures, imagine and write a story. 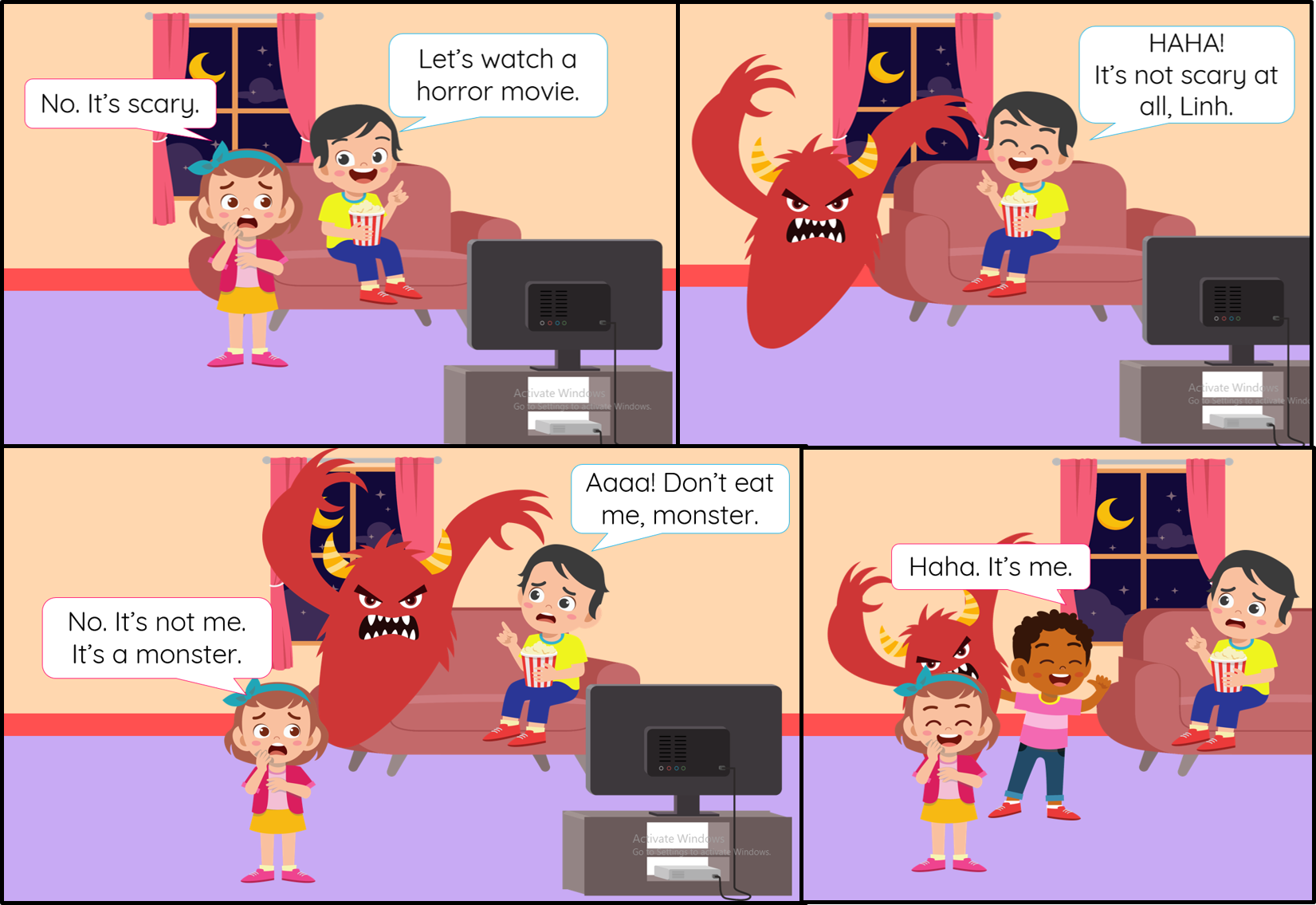 Let me tell you a story. It was a Halloween night, I was in my cozy house, the sky was dark and the wind kept blowing like someone was whistling outside the door. My parents were out for work so there were only me and my brother, Ba. He suggested watching a horror movie but I refused, I hate scary movies. Especially the one he was watching, the film was so weird, it showed a scene of some people being tightened into chairs and a guy who wore a bunny mask was whispering something to them. Hmm, not exactly a guy, he was more like a giant beast and that frightened the people. Anyway, I didn't want to watch it so I was going to go to my neighbor's house to find Jeremy, an enthusiastic kid who has many costumes to play with. How surprising, he was also going to my house to find me and my brother, he said that his parents were also out for work. Huh, why did the adults go out for work on days like those? I didn't think much of it, when I saw Jeremy with a monster costume, I had a great idea. My brother was watching the film when Jeremy walked in in the costume. He wasn't scared and thought it was me in disguise, and then I showed up from the door, acted like I knew nothing. Haha, you have to look at my brother's face, he was screaming " Aaaa, don't eat me monster!" with fear. Then, Jeremy took off his costume and laughed, we both laughed. However, my brother was still screaming and terrified, he didn't look at us, he was looking at the door. The light flickered and I saw a shadow shining on the wall, a man with long ears. I looked at the TV screen, the film was still there but the guy had gone.

One evening, Minh was sitting on his brown sofa and hugging a bag of popcorn while inviting his sister Linh to watch a horror movie. "Let's see a horror movie". His sister trembled and replied: "Oh no, I'm scared". After that Linh went to the room leaving Minh alone there, the movie was in a good, thrilling episode when Minh suddenly felt cool behind him, he turned around and saw a color monster with sharp teeth, pointy and dense fur. It brought two sets of claws out in front of Minh but he laughed again. "Haha, it's not scary at all, Linh." But the little girl Linh ran out in panic and call Minh. "No, it's not me. It's a monster". When I heard that, his face turned pale, he raise his hands to block in front of him, his mouth screamed loudly. "Aah. Don't eat me monster." Suddenly Linh laughed and laughed, it turned out that it was a boy of Linh's friend named Tom."Haha, it's me. Happy Halloween."

Hello! I'm Ba. And now I will tell you about my interesting Halloween night. Let's start!***12:00 pm. At my villa, at a dark and stormy night, it was only Moonshine - the best background for Halloween, I and my best friend - Linh, were watching a... horror film - Annabelle !!! Only me and her. Why? Before I and Linh went my home, we and our class had played Halloween together at school in the evening. I had disguised as a Beast and Linh had been a Beauty (story Beauty and the Beast). We had danced with horror music. Suddenly, it had been raining and then Linh had been tired. So I had taken her to my villa because it's near our school. My parents had been pleased with her presence. After we had had a dinner, I and Linh had conversed with topic: Horror.***We overslept until the midnight. My mom had phoned Linh's mother so Linh was allowed overnight at my house. The rain has stopped but the wind was very strong - it was storm. I and her decided to stay up all night. "- Let's watch a horror movie, Linh!" - I suggested. "- NOOOO!! I hate it. It's very scary and obsessive, please..." - Linh made a fuss. I tried to persuade her: "- No no. It's Annabelle... but..." She interrupted me: "- That's very very horror!" continued: "- Correctly! Uhm... but we will watch a humorous version of Annabelle. Have you ever been enjoyed?" - Oh, hmmmm... - Linh was confused.I turned on the TV quickly. And we watched together..." We laughed so much together with TV lighting, hommey... Suddenly, I heard a big laughter. I asked: "- It's not scary at all, is that right, Linh?" The answer was trembling sound: "- No. It... it's not me... It's a... a Monster... "I didn't know what matter with Linh. I looked to the right and... what a terrible thing! - Monster! I shouted out: "- AAAAAAAA!!! Don't eat me, Mon... monster!The Monster answered with horror voice: "- No. I will eat you. Because you left me to go out with girlfriend." I felt the voice is quite familiar: "- You... you are..." "- Hahaha... It's me. - He took off the Monster costume. I was very surprise: "- Oh! Tom (my friend). Why are you here? And how?" Linh was also surprise: "- Exactly! How did you come here, Tom?" He was amused: "- It's easy! I and Will came here when you and Linh were sleeping - it's very romantic (Tom glanced at us). I was embarrassed: "- What else? - And then we had a delicious dinner with your parents. They're very kind and hospitable! - Will step out of the curtains with a big candies bag on his hand. - This is the prize of our class for Halloween day, Tom, Linh. Let's enjoy together!\nFinally, Linh, Tom, Will and me ate candies while watching Annabelle all-night.